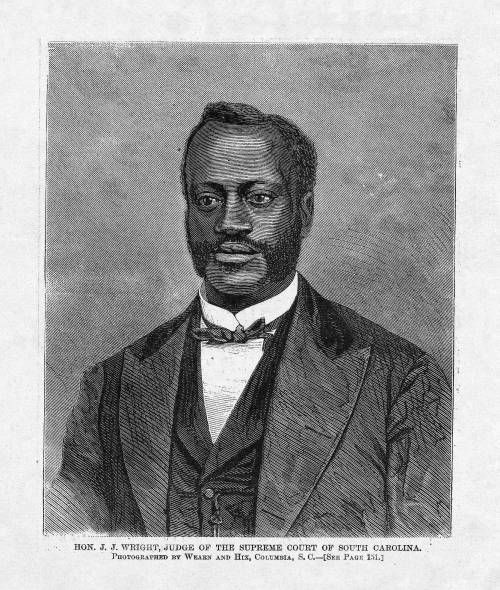 The two-story stuccoed masonry building at 84 Queen Street was built c. 1876 by German-born merchant William Ufferhardt replacing an earlier building lost in the great fire of 1861.[1] A Charleston single house in plan, a two-story piazza previously spanned the narrow space on the west side of the building. Notably, from 1879 until 1885, the building’s first floor served as the law office of Justice Jonathan Jasper Wright, the country’s first African American State Supreme Court Justice.[2]

Wright’s parents were born into slavery, but escaped to freedom in Springville, Pennsylvania, where Wright was born on February 11, 1840.[3] Wright studied law at Lancasterian Academy in Ithaca, New York and passed the Pennsylvania bar exam in 1866, making him the first African American attorney to be officially recognized by the state.[4] Having traveled to Beaufort, SC at the end of the Civil War to teach newly freed men, Wright returned to South Carolina as a practicing attorney in the late 1860s and was elected as an Associate Justice of the Supreme Court of South Carolina in 1870, a major milestone for African American civil rights just five years after the end of the Civil War.[5]

Wright held this position until his resignation in protest to the dubious and violent election of then Governor Wade Hampton III in 1877, the same year the last federal troops were withdrawn from the occupied south. This signaled the end of Reconstruction and the beginning of the era of Jim Crow oppression that reversed much of the progress made by African Americans in the previous decade.[6]

In 1879, Wright relocated from the state capital to Charleston, establishing his law office at 84 Queen Street. While practicing law in Charleston, Wright also established and served as the Chair for the Law Department of Claflin University in Orangeburg.[7] Justice Jonathan Jasper Wright died on February 18, 1885 and is buried in the graveyard of Calvary Episcopal Church. A testament to his contribution to the advancement of African American representation during the Reconstruction Era, news of Wright’s death was reported as far as Pennsylvania, Maryland, and Ohio.[8]

[3] Caleb A. Jaffe, “Obligations Impaired: Justice Jonathan Jasper Wright and the Failure of Reconstruction in South Carolina,” in Michigan Journal of Race and Law, Vol. 8 Issue 2 (2003).

[5] The Wilkes-Barre Law and Library Association, “Celebrating the Admission of the Honorable Jonathan J. Wright as a Lifetime member of the W-BLLA,” ed. By Joseph P.J. Burker III, Esquire and Amy Bickin and Carol Lauer, in The Luzerne Legal Register Vol. 97 No. 8, 2007.